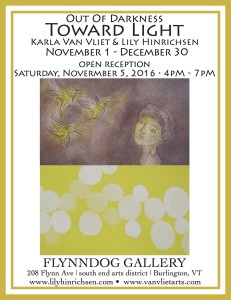 Coming Out of Darkness TOWARD LIGHT

To be physically or emotionally in a place of darkness can be daunting, fear-inducing, and rife with anxiety. At least for me.

The inability to see clearly.

The unknown possibilities lurking beyond my reach.

And yet, these are the very attributes I relish in my studio practice.

Sitting with these Unknowns ironically moves me eventually into clarity, definition, and ultimately – completed works of art.

These new works are no exception.

The square has become a boundary for me to work in and around. It grounds and stabilizes the myriad of snapshots revealing themselves as clusters of circles, wandering lines, and dots of French Knots.

Light and lightness tread delicately across the white surfaces in the form of fine lines, hand sewn paths, shades of yellow, and even the spaciousness of the paper itself. The color yellow draws me in . . . and out — much like a Full Moon, a setting sun, a bonfire.

are words that come to mind as I move toward light in these mixed media pieces.

As a girl I was introduced to the Quaker concept of the light within. I imagined a lit candle burning within me and was greatly comforted by the thought.
The light within, the lit candle, an illumination of the self from within the self. The quiet presence of divine energy, as the Quakers say it. A place of meditation, waiting and what arises there, out of the darkness, into the flickering light of consciousness.

Out of Darkness: Toward Light.

These new pieces have the feel of being uncovered by that light. And also, that they are stepping forward into that light, to be seen at last. They have a kind of ancient feel to them, portraits of women, women who have historically not had a voice, a record; I am making their record, each with her own expression, her own selfness.

I use a technique I call scored painting. I score into a gessoed surface and then through a process of applying thin layers of paint and then lifting them from the surface. This fills in the scoring and creates an etching-type look. The thin layering of many colors gives the pieces their atmospheric feel lending to the introspective nature of the pieces.

Art Educators Unite is a group of 18 Vermont art educators who support each other in their personal art making. We meet monthly to share our artwork and to help each other work through the challenges of making art while juggling busy teaching and personal lives. 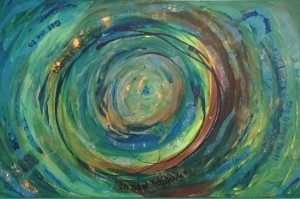 Not So Famous Cities Series –   Burlington Vermont – Acrylic on canvas  $500 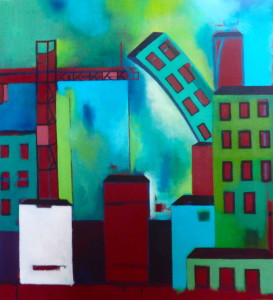 Introducing The Not so Famous Cities Series

Spending time painting between Austin, Texas and Calais, Vermont, Azarian has produced a collection of paintings in various stages of completion.  Azarian, a Vermont native who now resides in Austin, Texas, likes to describe his paintings as cute, colorful, humorous, a non-conceptual stream of consciousness works of art. All works for this show were painted in 2015 – 2016.

Impermanence, sculpture and drawings by Margaret Jacobs and Justin O’Rourke