NAGOYA/VERMONT: On The Planet: An International exhibition in recognition of the 10th anniversary of the UN Convention on Biodiversity. Work by Vermont based artists that is be part of an international exhibition at the Nagoya Citizens Gallery in Yada, Nagoya Japan, January 27th – February 7th, 2010. The vision they offer will be shared with the 191 attendees of the UN Convention on Biodiversity to be held in Nagoya in October, 2010.

A presentation/talk/panel at 6, and then music by Occam’s Razor and reception to follow with opportunity for donations to raise some funds for the trip! The exhibit runs only from January 5th-8th because after the 8th it’s packing and flying away to Japan~ sayonara~!

Work will be auctioned thru January 10th to support the project http://benefitevents.com

Sophie Hood is a recent graduate of Dartmouth College, where she received the Melissa Brown Hurlock-Hobson 1993 Award for studio art. She majored in Asian and Middle-Eastern Studies. She works in three-dimensional media, creating jewelry in both fine metals and found materials, and making larger sculptural works in welded steel, fiber, and re-purposed plastic, some of which can be worn as costumes and used in performance art. In addition, Sophie is proficient on the violin and studies Japanese. She is currently living in Hanover, NH where she works as a post-graduate Intern in the Studio Art Department at Dartmouth College and Visiting Artist at the Claflin Jewelry Workshop at Dartmouth College.
Statement: “I am very interested in the relationship between people and art and blurring the lines between fantasy and reality; playing with every day life and creating wonder, amusement, or even confusion through performance art. In this exhibit I am continuing my exploration of performance, using plastic bags and creating plastic bag creatures. This plastic takes over 1,000 years to decompose – to die. These beings are ancient and ageless in the eyes of humans. Like long-lived turtles, they move slowly through this world and like the alignment of the planets will only be witnessed, alive and moving, once during the exhibit. They are all different heights and they move in a line, on a journey with no end in sight. As plastic bags move through our daily lives, never given a second glance, so do these creatures. Their arms hang down to the ground, aiding in their movement. They are covered in a coat of plastic bag frills, creating a swishing/crinkling sound effect as they lumber forward, going about their daily lives.”
website 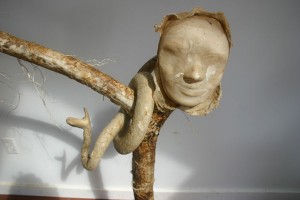 Riki Moss was raised in Brooklyn, earned a BA at the University of Chicago, studied ceramics at the San Francisco Art Institute and received an MFA at the Vermont College of Fine Arts. She has exhibited works in clay, encaustic and paper sculpture widely throughout New England. She was an Art Matters grant recipient and is the author of a novel published in 2009 by North Atlantic Books. For the past five years, her work has revolved around the idea of a Paper Forest, an ongoing sculpture evolving in her studio on an island North of Burlington, Vermont.
Statement: “The Planet, the one I will live on, is forest, rock, soil, leaf, cloud, lake, rain, wet air, mold and weather. It is filled with creatures, their nests and their bones, plant, animal, insect life, one thing the food for the other, everything manifesting and decomposing like mad. It provokes me. I want to see it all, the ruinous marks made by my species as well as the tiniest hints of renewal, the left-over light. I make my portrait of the forest with abaca paper, pressed into sheets using traditional papermaking techniques, formed over various structures and merged into collaborative life forms. The experience of creating objects to populate the installation – stand-ins for a disappearing natural world – with its substitute materials and problems of structure, with its inescapable futility and replacement purpose, draw both the artist and the work, unbidden, toward shock, surprise, joy and sadness.
website 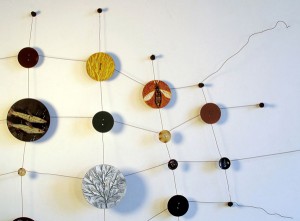 Janet Van Fleet grew up in Santa Fe, New Mexico, studied at the Art Institute of Chicago, then earned a B.A. in Psychology and an M.A. in Education. She is a founder of Studio Place Arts (SPA), a three-story community center for the visual arts in Barre, Vermont, where her studio is located. Van Fleet has been awarded grants by the Vermont Council on the Arts/National Endowment for the Arts and the Vermont Community Foundation for the creation of three large installations. She was chosen in 2008 to create the central gateway exhibit in the Environmental Exhibit Collaborative’s Smart Art: Exploring Science and Art, which is touring to museums in Massachusetts, Vermont, Maine, and Quebec. Van Fleet is also active as a curator, writes about the visual arts as a reviewer for Art New England, and is an editor of Vermont Art Zine.
Statement: “Circular Statements, my work with disks in wire grids, has been described as “the architecture of spacetime.” In all the pieces in this body of work, I use the humble materials of buttons, tin disks, and the shadows they create to represent, both formally and symbolically, all the different orders of magnitude in the material universe — from sub-atomic particles through suns and galaxies. In this exhibit, created as a meditation on biological diversity and the death of species, the grids have become much looser, appearing to be torn apart, or unraveling, The edges of these grids reference not only ripping and tearing, but also growing tendrils and unwinding strands of DNA. The blank disks suggest death and extinction, but also the appearance of new life, new species, and new possibilities on the planet.”
website 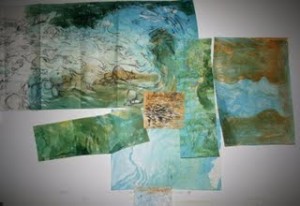 Janet Fredericks spent her early years in Vermont. She studied art at Green Mountain College, William Patterson College and received her Bachelor of Fine Art Degree from Barry University. She has had major shows, both in this country and abroad, steadily creating bodies of work informed by her interest in and observations of her natural environment. A Vermont Arts Council /National Endowment for the Arts and New England Foundation for the Arts Fellowship recipient, she has received artist residencies at The Virginia Center for the Creative Arts, Ucross Foundation, the Vermont Studio Center, Venice Printmaking Studio and the International School of Art, Umbria. Her current work expresses the artist’s continuing interest in water and the complexities of its language. Mysterious and sensory, Fredericks’ drawings and paintings are at once maps, conversations and prayers linking the observer to a deeper communion, a reverent awareness of the history of water as a conduit and amplifier of intuition, a repository of ever changing but expanding memories and markings.
Statement: “The water drawings evolve from the artist’s observation of the New Haven River, a local stream flowing from the mountains of Vermont. Probing the essential surface patterns, light and rock forms beneath, Fredericks has discovered in the flowing water what she calls “water’s language,” a lexicon of linear patterns consistently found in moving water. By standing in shallow water the artist is able to replicate, with a lithography crayon, the flow on heavy watercolor paper. She then makes notations and brings the paper back to her studio to add color and further visual information. This is part of on-going projects in which drawings are made in and by bodies of water, most notably the New Haven River in Lincoln, Vt.”
website